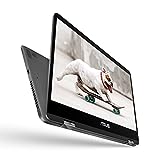 The all-aluminum Asus ZenBook Flip 14 is as attractive as it is speedy, giving you the performance you want in a design you’ll want to flaunt. The only downsides are that it lacks Thunderbolt 3 ports and has a stylus that should feel better against its screen. The competition is fierce in this category.

It’s loaded with 16GB of memory, and 512GB of storage. All of that powers the 14-inch touchscreen that’s held to the body of the Flip 14 by two, 360-degree hinges. The Asus ZenBook Flip 14 is a touch-screen convertible that makes (almost) no compromises. Not only does the 8th-Gen Intel Core i7 processor in the $1,299 model we tested provide stellar speed, but this laptop also has a bright, beautiful screen; long battery life; and sweet audio.

The Flip 14 also benefits from Nvidia graphics, helping this system outperform other laptops with integrated GPUs. We have some nitpicks, such as the awkward stylus, but overall, this is a fantastic luxury laptop that’s worth checking out. Measuring 0.5 inches thick and weighing 3.3 pounds, the 14-inch ZenBook Flip 14 is slim but a little on the heavy side. The left side of the ZenBook Flip features one of its two USB 3.0 ports, as well as buttons for power and volume. Over on the right side, you’ll find a microSD card reader, a data-only USB Type-C port (which doesn’t draw power), a headphone jack, the second USB 3.0 port, an HDMI output port, and a power adapter port.

Biometric security on the Flip 14 is handled by its IR webcam and fingerprint reader, both of which work with Windows Hello. While the webcam is located in the middle of the top bezel (naturally), the fingerprint sensor is in the top-right corner of the touchpad, wasting space you could have used for navigating.

Buy this laptop on Amazon

Laptop Video Reviewer 1 February 4, 2019
The Asus Rog Strix GL753 isn’t the best-looking laptop on the market but it is comf...

LEAVE YOUR COMMENTS BELOW